Electricity comes in two mouth-watering flavors: Alternating Current and Direct Current.  Direct current (or DC) electricity is what powers most complex electronics like CD Players, TVs, computers, and (surprise) vacuum tubes.  Batteries also provide a direct current. Unfortunately direct current kind of sucks for long-distance power transmission because of the relative complexity of efficiently transforming one DC voltage to another and the power lost to the inherent resistance in transmission lines.  And you can’t just walk around constructing additional f&%king pylons everywhere.  It’s f#&king inefficient! 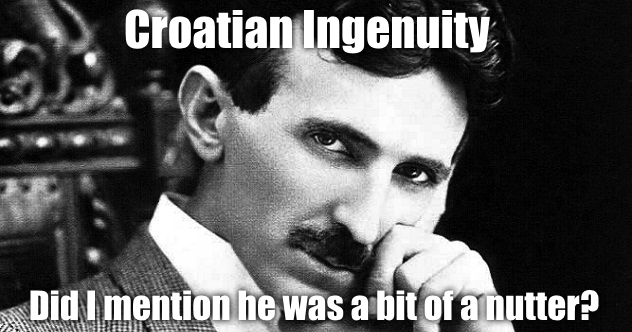 Because of this shortcoming in DC, crazy Nikola Tesla came up with a much more efficient AC power transmission system that is still basically what is used today to get electricity from the power plant to the socket in your wall.  Alternating current is very easy to transform to high voltages and low currents and back again, and it’s therefore easier to send across long lengths of wire without losing a ton of power.  But, alternating current flows in two directions (that’s why we call it ‘alternating’) and that would make using it to power complex electronic devices much more difficult.

So, the primary job of the power supply in a tube amp is transforming AC from the wall socket into nice and stable DC.  The DC voltage that comes out of your power supply is frequently referred to as the amp’s B+ voltage (AKA HT for high tension, AKA HV for high voltage).

The first stop on the power supply train is the power transformer.  Tubes generally prefer high voltages (300 volts and up) to perform at their best and, as mentioned above, AC is easily and efficiently transformed from one voltage to another.  This is accomplished with a power transformer.  One hundred twenty volts AC (or 240V in some countries) from the wall goes in, and high voltage AC comes out.

Power transformers work using electromagnetic induction and wires coiled around a metal core.  Your head would explode if we tried to explain it all here, so let’s just leave it as “wall voltage in and high voltage out.”  It is important to note that the primary (input side) and secondary (output side) of a power transformer are not directly connected.  This is a safety feature because it means that if you feck up, and feck up you will, your unsafe situation is limited by how much power the transformer can handle and not how much power your home’s circuit breaker can handle (usually a feckton).

The electricity that comes out of your power transformer is still AC.  Turning this AC into DC is the rectifier’s job.  In tube amps, we usually use diodes.  Diodes can be rectifier tubes (5AR4 tube, for example) as well as solid state devices (semiconductor diodes, like 1N5408).  Both types of diode allow current through in only one direction.  Now, remember how we said that AC flows in two directions?  Rectifiers fix this, but they aren’t perfect.

Imagine AC as a sine wave.

The voltage goes up and down continuously (50 or 60 times a second, depending on the country).  If one rectifier diode only converts the electricity flowing in one direction to DC (known as half wave rectification), it’s kind of choppy, right? 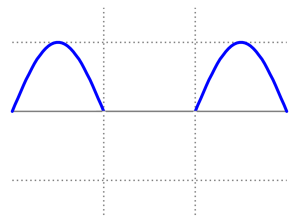 If we use multiple diodes to convert both the positive and negative parts of the AC wave to DC (full wave rectification), it looks a little better.

The DC voltage output of full wave rectified AC is the peak AC voltage divided by the square root of two.  Multiplying the rated AC of the power transformer secondary by 1.4 works pretty well as a first approximation though.

1. My transformer doesn’t have a center tap and I want a full-wave rectified DC output.

You want to use a diode bridge (figure 4-8). This is four diodes arranged to rectify both positive and negative phases of the power transformer’s AC output. Your ground will be taken from the bridge, NOT THE TRANSFORMER. This ground at the junction of the diodes creates a return path for current that ‘switches’ with the changing phase of the secondary’s AC output.

2. My transformer has a center tap and I want a full-wave rectified DC output.

You want to use a “conventional” full-wave rectifier (figure 4-5A). This requires only two diodes (solid state or a rectifier tube). Your ground is taken from the center tap of the transformer (which is then the return path for current). Many center tapped transformers are rated as the full end-to-end secondary voltage. For example, a 300VAC center tapped secondary would actually provide 150VAC into a conventional full-wave rectifier. You’ll sometimes see the same transformer listed as 150V-0-150V.

Here’s a great clarification of what’s going on with full-wave bridges and conventional full-wave rectification.

How much voltage do I get?

With either of the above, the unloaded DC output into a capacitor-input filter is approximately the AC output from the secondary times the square root of two, minus the voltage drop across the diodes (minimal for solid-state, can be considerable for tube rectifiers). Into a choke-input filter (unloaded, ignoring diode drop), the output will be approximately two times the square root of two divided by pi (about 0.9) of the AC output of the transformer secondary.

3. My transformer secondary has a center tap, but I want a bipolar power supply.

Here you can combine the center-tapped transformer and the aforementioned bridge style rectifier. See figure 5.1c here. This creates two separate full-wave rectified voltages, one positive and the other negative with respect to the center tap. If you read a lot of TubeCAD, you see bipolar tube circuits pretty regularly.

To achieve this, you can use a voltage doubler (see figure 4 “Delon circuit). This requires two diodes and two capacitors. Because the capacitors will see large pulses from the diodes and will be supplying the rest of the circuit continuously, they need to be a fairly large value. But because each only sees half of the supply voltage, their voltage ratings are a little more relaxed in comparison to what is required in a filter. The unloaded DC output into a capacitor-input filter is approximately twice the AC voltage from the transformer secondary times the square root of two. Current capacity must be de-rated at the output voltage by a factor of at least two.

6. My power transformer has dual matching secondaries and no center tap. What do I do?

This is common with toroidal power transformers in particular. You can wire the two secondaries in parallel (making sure the polarities are matching) and use a bridge rectifier like number 1 above. The AC output of the transformer will be the same as either secondary by itself (and current capacity will be doubled). You can also wire the secondaries in series by connecting a positive and negative from each secondary (not the positive and negative from the same secondary!). This creates a center tap at the junction. The AC output end-to-end will be twice the AC output of a single secondary if the secondary is not grounded (see number 4 above). If you ground the secondary you created, you can use a rectifier like number 2 above.