There is straight up a butt-load of single-ended amps out there in the design-o-sphere. The two-stage transformer-coupled amp approach sounds damn good and so its popularity shouldn’t be a surprise. With a little google fu, you can find a single-ended permutation for just about any common triode or pentode that can dissipate more than 10W.

Here are some of my DIY favorites:

I thought long and hard (giggle) about publishing anything that skins this cat. The above schematics are relatively simple and sound great. They use CLC filters in the power supply for low ripple from the PSU. They use resistor loads for the input tubes to put them at tried-and-true operating points that you can easily find and tweak on a load line. They use some kind of feedback (plate to plate or ultralinear) to make the pentodes behave; alternatively they could be triode strapped if you prefer. There is nothing not to like about these circuits. They are different but successful answers to the same question.

But the rabbit hole beckons. 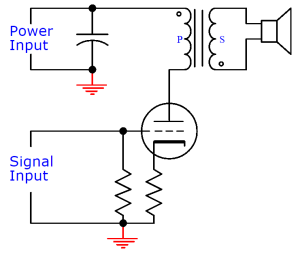 Ripple from our power supply also appears across this cap in parallel with the output transformer + tube (finding its ground reference at the cathode of the tube). Minimizing this ripple usually means a large capacitance part at the end of the power supply because this will shunt as much of the AC ripple as possible to ground (through the cap). Large cap values usually mean electrolytic types; these tend to be nonlinear with regards to frequency (Ref 1, Ref 2). Although ripple will not change in frequency much, the output signal, which also appears across this capacitor, does.

What we want, in an ideal world, is minimal interaction between the output signal and the power supply. In practice, this is an assumption when we design amps: only the tube and output transformer are taken into account. Reducing the impact of our power supply brings us a little closer to the ideal. Minimal amplifier-psu interaction requires linear, low-ESR capacitors and a low output impedance supply to feed them. I’m not giving up on CLC filters, but there is only so much we can realistically accomplish with passive filters.

[TimeOut] Let’s be honest. Tube regulators look awesome and make it easy to dial in a B+ voltage. If I were to rank the factors that lead me down this road, those would be near the top and the theoretical advantages (regardless of how awesome the amp ended up sounding) would be just dressing on the window through which I’m tossing good sense and practicality. [/TimeOut] 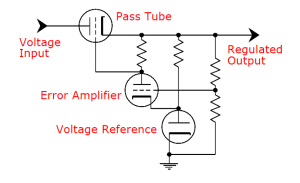 The series/pass tube will have to be able to handle at least the current drawn by the amplifier. This being a low power speaker design, I’ll use 150mA (75mA per channel) as a target. The series tube will dissipate power equal to this current times the voltage that it is dropping from its anode to cathode. If the tube drops 100V from the raw B+, it will be dissipating:

Luckily for us, there is a high perveance, high current tube designed for exactly this kind of application: the 6AS7. This is a dual triode and so, assuming we’ll use both triodes, the 150mA total current can be divided between them for 75mA each. Here are the upper and lower bounds of voltage across the tube limited by 0V on the grid (25V anode to cathode) and 13W dissipation (170V anode to cathode).

Telling the 6AS7 how much voltage to drop from anode to cathode is as “easy” as biasing the grid at the corresponding grid line. If we have a 75mA load (per 6AS7 triode) and want to drop 110V, we just bias the grids at -40V (point #2). If we draw less current, the needed grid bias will change, but the concept remains the same.

As you may have figured out, getting a solid output voltage requires a solid grid bias. For that we need a voltage reference.

As long as we’re throwing practicalities out the window, we might as well use a good old VR tube as our reference.  They’re big, they glow, get used to them. If we wanted to save some space and cost, a zener diode would also do just fine. As you’ll find out in the next section, the amount of voltage across the reference will subtract from the available headroom in our error tube.

The 0C3 VR tube sits at a reasonably stable 105V, regardless of current. To avoid unnecessarily loading the pass tube, it can be fed from the pre-regulator portion of the supply by a ballast resistor. This resistor is sized based on the raw B+ voltage and the current we want in the 0C3 (unlike other VR applications, we don’t have to worry about an additional load). In this case we want about 10mA through the 0C3 and the raw B+ will be about 450V. So the resistor we want is:

I’ve got buckets of 12AX7s. We could make an error amplifier by biasing the cathode of a 12AX7 up by the voltage reference and feeding the grid from the output. This is just like a grounded cathode amplifier and a totally valid approach, but it leaves one half of the dual triode unused (any my inner compulsion can’t abide that). We could also use a 12AX7 cascode, but this will result in a need for additional heater taps to avoid violating the maximum heater to cathode voltage. If you have a small high gain pentode around, the error amp is also a great place to use it.  But like I said, I’ve got too many 12AX7s.

For the error amplifier I’m using both halves of a 12AX7 in a differential amplifier. The grid of one half (configured like a cathode follower) sees the voltage reference, creating a corresponding non-inverted signal on the cathode. The other half, sharing a cathode resistor with the first half, is fed a sample of the regulator’s DC voltage output through a resistor divider. It’s this second half, fed a cathode voltage from the first half and a grid voltage from the output, that functions as the differential error amplifier. More exotic error amplifiers are certainly possible, but the differential amplifier seemed like a logical fit here for a dual triode.

Our resistor divider (right side of diagram), with a variable resistance sandwiched by two fixed resistors, sets a DC bias on the grid of the error amplifier. Because we also want the (inverting) error amplifier to help cancel ripple on the output, we bypass the upper part of the resistor divider with a capacitor so that all of the AC ripple makes it through to the grid (rather than dividing the ripple down to a lower level with the resistors).

Just like the pass tube from earlier, the grid bias will determine the anode to cathode voltage. In this case, the voltage at the anode of the error amplifier determines the grid voltage on the pass tube, which in turn determines how many volts it drops, which sets the error tube’s grid bias through the resistor divider. Round and round we go. This is that terrible, awful, no-good, dirty feedback thing you’ve read about. But come to find out feedback is really just misunderstood. He’s a charming little audio misanthrope full of ello gobnahs and monkey shines, whose delightful hijinkx consternate the puritanicals but bring joy and fun to the world of tubes. Give feedback a chance; deep down he’s a good kid.

[TimeOut] Yes, I just anthropomorphized the shit out of feedback. [/TimeOut]

The pass tube’s transconductance is multiplied by the error amplifier, resulting in an output impedance in the single digits. It also rejects what little ripple is left on the B+ after a simple pre-regulator filter and so the final cap before the amp can be a modest sized film capacitor for superior linearity. What’s not to like?  Oh yeah, it’s complicated as shit.

If it’s any consolation, you’ll be able to easily vary the output voltage, and have lots of glowing tubes to gaze at as you contemplate how you reached this level of unhealthy infatuation. When you attach an amp, it sounds good too.

My build is fed by a 5U4GB tube rectifier followed by a cheap CLC filter (20u – 1H – 120u). The power transformer is a Hammond 274BX (750V CT). The specifics of what feeds your regulator are variable because the ultimate performance will rely more on the regulator than the raw B+ you feed it. Try to shoot for around 450Vdc unregulated input with a current capacity of at least 200mA and you should be good to go.  A simple filter before the regulator may not be necessary, but because I had some room in the chassis, I figured why not (the choke was chosen for low DCR rather than high inductance).

An important aspect in powering your regulator is the heater voltage bias.  The 6AS7 has a maximum Vhk of +/- 300V and the 12AX7’s is +/- 100V. I biased my heaters to half the output voltage with a resistor divider. This keeps both tubes in spec regardless of the output voltage. Other error amplifiers (eg cascode) may require multiple heater supplies so that they can be biased individually. This is another factor in my decision to go the differential route. I used the heater taps on the 274BX for the amplifier and a separate heater transformer for the power supply tubes’ heaters.

Holy crap, you still have to read about the amp