The regular Muchedumbre is an ultra-simple buffer with few parts and straightforward operation. It’s a great beginners circuit for high voltage tube applications.

If you’d like something with just a little more nerd sprinkled on top (and an extra 12AU7), try the following. This XL version uses a White Cathode Follower buffer for about half the output impedance of the vanilla version. It requires a few extra resistors and caps and the heater reference voltage is tweaked just slightly so I can sleep better.

For ideally symmetrical drive ability, the series resistor in the anode of the upper 12AU7 should be calculated as:

Plugging in values for a 12AU7 and a (worst case) 10k input impedance gives you about 1k5 (rounded so that it’s an easy to find value). You can optimize this for the input impedance on your amp using a plate resistance number of about 7k and Mu of 20. Just keep in mind that the resistor is in series with the tubes and so it drops B+ voltage based on the current at the bias point.
I am assuming a low input impedance on the amp and so the calculated value is also on the low side, but this preserves operating voltage and overhead. The actual drive current required in a typical preamp output stage is very small, so even a loosely optimized WCF is plenty capable. When in doubt, use smaller values for the series resistor for line level. If we were trying to drive something needing lots of current swing like a bunch of parallel output tubes or headphones, we’d be pickier about Rseries. 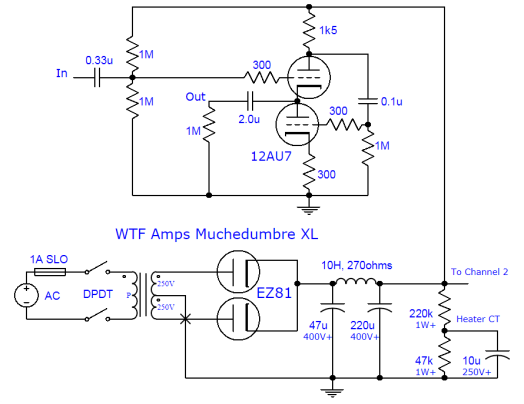 If we break down the circuit into a cathode follower (upper triode) and a grounded cathode amplifier (lower triode), we can see that this creates a nifty push pull circuit. The cathode follower is non-inverting, so it’s pulling the output in the same direction as the input signal. The lower triode is a grounded cathode amplifier and so it inverts the input that it sees. But the input that it sees is from the anode of the upper triode, which is already inverted. You invert the inverted and you get non-inverted (same ‘direction’ as the upper triode). Tada!  Push (lower) pull (upper).