I’ve been kicking the hybrid amplifier can down the road for quite a while. In essence, I’m looking to do a bigger EL Estudiante. An amp capable of driving speakers to a dozen or two watts using a MOSFET follower output stage for current gain and a tube handling the voltage gain. While this is not especially difficult on paper, making something that is an interesting and practical alternative to tube output stages is not necessarily so straightforward.

On one hand, one should consider the target user. Most tube enthusiasts do not need so much power, so we can bias in Class A and avoid a whole lot of AB headaches and worry about bias adjustment, crossover distortion, etc. This has to be balanced against heatsinking and thermal considerations, of course. Coming from the world of tubes, our audiophile anti-bodies have already pretty well encysted any commonsensical tendencies we may once have harbored, but the smoke point of drywall hasn’t changed. That is to say solid state does not magically make Class A cool, efficient, or pragmatic, but why make something hotter, more wasteful, and more burdensome than vacuum tech? We’re hoping to make something that is more than the sum of its parts. 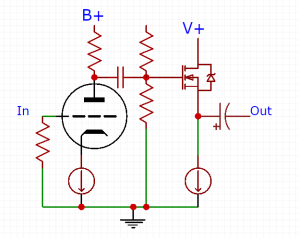 The Aikido Hybrid 16W SE by John Broskie has about as much power as most probably need. Sixteen is two to the fourth watts, so four times three decibels per doubling of power for a 12db increase over nominal speaker rating (eg your 90db speakers peak at 102db). The quiescent current is a very serious 2A. It is a single-ended MOSFET source-follower loaded by a current source. There’s little not to like other than the coupling caps (contrast this with output transformers for AC coupling in full tube amps). See also Rod Elliott and Pavel Macura’s CCS-loaded follower here. 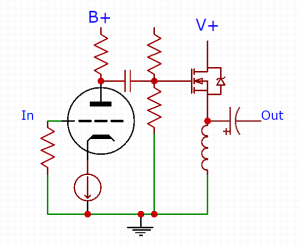 We can make single-ended more efficient with an inductive load.  Just like a choke load with tubes (eg Luciernaga), an inductive load on a MOSFET lets it swing voltage past the power rails.  The MoFo is an example of a single-ended source-follower MOSFET with a simple passive choke load (50-150mH and very low DCR). This is much more efficient than an active CCS in an absolute watts dissipated sense (note the much lower supply voltage), but chokes ain’t cheap and you still need a good dose of current. 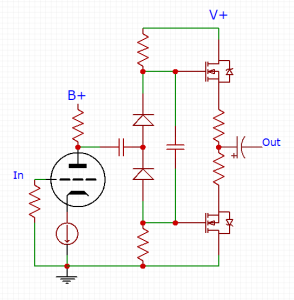 If you want to lower the quiescent current needed, but stay in Class A, push-pull source-followers are the way to go. Papa Pass’s F4 power buffer does exactly this to cut the quiescent current needed in half. The need to match FETs may be unappealing, but compared to his single-ended F3, F2, or Aleph J, the power delivery into 4 ohm loads is much improved. Note Broskie suggests the same push-pull MOSFET approach (with a different biasing scheme) in the Moskido amp design.

Any of the above would probably sound pretty good: like a tube feeding a very transparent solid state amp. If the amount of power you need is modest (and it probably is if you’re a tube enthusiast), these approaches have made very nice speaker amps. Hopefully I’ll have my own design to contribute soon. MOSFET followers would also make a great multi-watt amp for low sensitivity and low impedance headphones, like the HIFIMAN HE-6.

The HE-6 are rated at a sensitivity of 83.5db at 1 mW.  With 1000x more power (1W), we’d make 103.5db (a 20db increase). Around 5W input makes it a cool 110db. Coincidentally, this is the power rating of the amp HIFIMAN recommends as a pairing.  The HE-6’s 50 ohm impedance lowers the quiescent current needed in a MOSFET output stage, though still requires a voltage rail high enough to prevent clipping. A quick approximation for voltage would be:

We only need about a 48V power rail and 0.5A quiescent current per channel to get us 5W into a 50 ohm load if using a CCS loaded MOSFET. If we choke load, cut the 48V in half. If we use Class A push pull, cut the current in half. The heatsinks aren’t going to be tiny, but a desktop size amp isn’t out of the question.